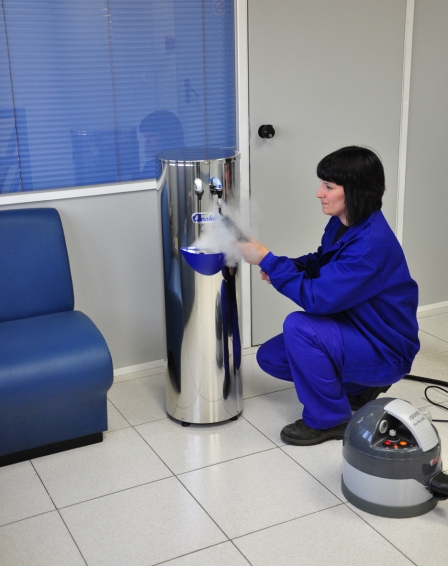 Canaletas were the first company in the industry to have passed the test of eliminating microorganisms under the European Bottled Water cooler Association (EBWA).
El Prat de Llobregat (Barcelona),8 January 2009

It is the quickest and most effective sanitization system for water coolers and drinking water fountains. The Steam sterilizer CANVAP is the method developed by the company to eliminate potential microorganisms. Since its founding, the firm has been distinguished for its innovative character and this commitment has helped Canaletas in developing innovative projects and are one of the leaders in the sector.

There are many coolers and pressure fountains on the market that can not be properly cleaned because for their design and materials used in their construction, this represents many health issues. The company ¨Canaletas¨ that manufacture water coolers and drinking water fountains is the first and only one to have passed all the tests proposed by the European Bottled Water cooler Association (EBWA) to all manufacturers.
These tests have been performed by the prestigious independent laboratory of Dr. Oliver Rodés Barcelona (Spain),a member of the Standards Committee of the EBWA.
Referring to the first test, which verifies the effectiveness in eliminating biolfim, Canaletas was the first and only company to overcome this and with " Excellence ".

Similarly, Canaletas was the first company to surpass the following test, more decisive than the first and made mandatory by the EBWA. In this case the tests were applied with water contaminated with Pseudomonas Aeuriginosa, a type of highly resistant bacteria and also multiplies rapidly. This organism is one of the sources of Biolfim and due to its characteristics, suggests that once eliminated, other microorganisms have also disappeared.

Jordi Morera, CEO of the company says : "The main advantages of the CANVAP Steam Sterilizer compared to other types of sanitation is that it reduces the processing time to only four minutes, while with other systems take a minimum of at least two hours , the method is effective and easy to use, requires no preparation in relation to the technical or safety precautions as it is very safe to use and it removes all types of bacteria. "

Canaletas has positioned itself as the pioneer manufacturer to overcome the sanitation tests and are the only one to have passed them both. After these tests, conducted on bottle water coolers, the next challenge was to apply these tests to Canaletas installed Water coolers and drinking water fountains, which by their nature are more complicated.
In this test, the results were just as highly satisfactory, Canaletas is now one of the few companies that can offer a satisfactory sanitation system for its entire range of water coolers and drinking fountains.

Currently, Canaletas is the most experienced manufacturer of water coolers and drinking water fountains in Europe and is characterized by its innovative spirit, this can be seen by the numerous patents that have been registered throughout its 45 year history. The company is now run by the second generation and is notable for the quality of its products that stand the test of time and offer a "life cycle" superior to most other coolers and drinking water fountains on the market.