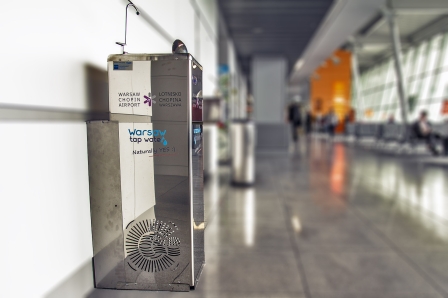 Almost half a century making Canaletas and Barcelona known to the rest of the world. It's been 45 years since in 1965 Jose María Morera, founder of the company, registered the trademark Canaletas, for the water coolers he was starting to make and commercialize. The catalan company specialized in designing and manufacturing of water coolers and drinking water fountains and commercialization of water filters, celebrates their anniversary being the first Spanish manufacturer of water colers and a reference in the industry.

From their first water cooler model they made until now, the active I+D department of Canaletas has allowed the company to design over 70 different models of water coolers and drinking fountains. Today, the company has over 40 models assigned to all kinds of sectors and uses, such as water cooler and drinking water fountains for offices, factories, schools, sports facilities... and different water filters. And that very first water cooler, although it has undergone important structural changes in the design, still is an important part of the range of products of Canaletas which shows the wisdom of its creator.

Today, the company is run by the second generation: Jordi Morera, current Director General and son of the founder, explains: "It has been very intense 45 years, in which above all, we have learned. We have grown a lot, but most important is the base that leaves us so many years of experience, that allow us to face the future, firmly."

Up today, the company exceeds 100.000 water coolers manufactured. " We have some relics of the early years of the company history-points out Jordi Morera- such as the water cooler number 165, which is the 65th manufactured, because the first one had the number 101". Out of this production, the company exports 30% to over 50 countries such as France, Portugal, Finland, Germany, Austria, Denmark and Middle East. As Jordi Morera says "CANALETAS, as the famous fountain of the Rambla street, has also contributed to the international projection of Barcelona during these 45 years and it is known worldwide."

In the history of the company there are some important milestones such as the three expansions of the water cooler factory of Barcelona, the moving of the industrial premises to El Prat de LLobregat in 2003, and important modifications such as the launch to the market of an  electronic water cooler with sparkling water, Jordi Morera explains how a factory stays up for 45 years in the market "forget about juggling tricks; work, constancy and illusion is the receipt. In 45 years there is always a flu that we heal. Maybe now it is pneumonia but with the proper antibiotics applied we will heal and we will come out stronger. We are on the way.

With the head office at Prat de Llobregat, Canaletas covers a 4200 square meters  facilities and bases their future on 4 fundamental pillars: Quality, exportation, I+D and customer service. For Jordi Morera "Customers, suppliers, associations, collaborators... there are many people to whom we owe this celebrations, because they have collaborated all along the company's history dedicating part of their lives"

Canaletas is a family run company founded in 1965, which focuses on the design and manufacture of all types of water coolers and drinking water fountains. Its headquarters are based in El Prat de LLobregat (Barcelona),the company has different branches throughout the country and a distribution network covering the mayority of European countries, while exporting to many different areas around the world. It is also active member of the main European water cooler and water treatment associations.

Currently, Canaletas is the most experienced manufacturer of water coolers and drinking fountains in Europe and is characterized by its innovative spirit, this can be seen by the numerous patents that have been registered throughout its 45 year history. The company is now run by the second generation and is notable for the quality of its products that stand the test of time and offer a "life cycle" superior to most other water coolers and drinking water fountains on the market.