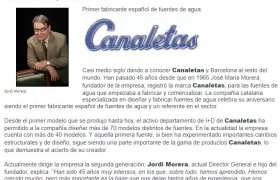 The catalan company specializing in designing and manufacturing drinking water fountains celebrates its anniversary as the first Spanish manufacturer of water coolers and a leader in the sector.
Nearly half a century presenting Canaletas and Barcelona to the rest of the world. 45 years have passed since 1965 when José Maria Morera, founder of the business, registered the name Canaletas for the drinking fountains that were beginning to be manufactured and commercialized.

The Catalonian company, specialized in designing and manufacturing water coolers, water dispensers and drinking water fountains, celebrates its anniversary being the first Spanish water cooler manufacturer, and a model in the business.

Since the production of the first water cooler prototype until today, the active Canaletas I+D department has allowed the company to design more than 70 different models of water coolers and drinking fountains. Currently, the company features more than 40 models. And that first water cooler, although having undergone significant structural and design changes, continues to be an important part of the wide range of Canaletas drinking fountains, demonstrating the success of its creator.

Presently managing the business is the second generation; Jordi Morera, current general director and son of the founder, explains: "They have been 45 very intense years in which, above all, we have learned. We have grown a lot, but even more important is the foundation that leaves us with so many years of experience, which allows us to confront the future confidently."

Today marks the day that the company exceeds the production of 100,000 water coolers and drinking fountains. "We have some relics from the early history of the company" - states Jordi Morera - "such as drinking fountain number 165, which was the 65th to be built, considering the first one was number 101." Of their production, the company exports 30% to more than 50 countries, such as France, Portugal, Finland, Germany, Austria, Denmark and the Middle East. As Jordi Morera states, "Canaletas, like the famous  "La Rambla" fountain, has also contributed to the international impact of Barcelona during these 45 years and it's well-known in almost any city in the world."

Throughout the company's history there have been several important milestones, such as three Barcelona factory expansions, the transfer to the warehouse in El Prat de Llobregat in 2003; and significant innovations like the launch of the first electronic water cooler for sparkling water on the market. Jordi Morera explains how one keeps a factory on the market for 45 years: "the ability to juggle various skills: work, consistency, and hope are the recipe. In 45 years there are always barriers that we must overcome. It may be pneumonia right now, but with antibiotics it will be cured and we will emerge strengthened. This is how we progress."

Located centrally in El Prat de Llobregat,  the Canaletas facilities occupy 4,200m2 and are based on 4 fundamental principles: quality, exportation, I+D, and customer service. For Jordi Morera, "clients, suppliers, associations, contributors... there are many to whom we owe this celebration, as they have contributed a part of their lives throughout the history of the company."
Canaletas 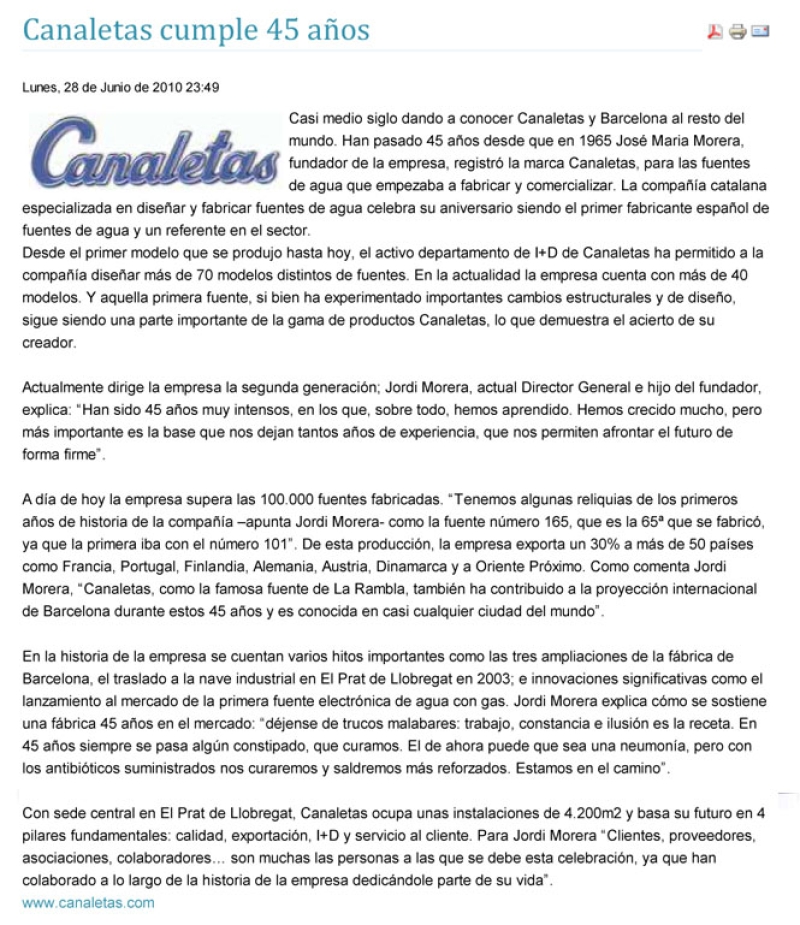